The Cathedral Church of St. Paul 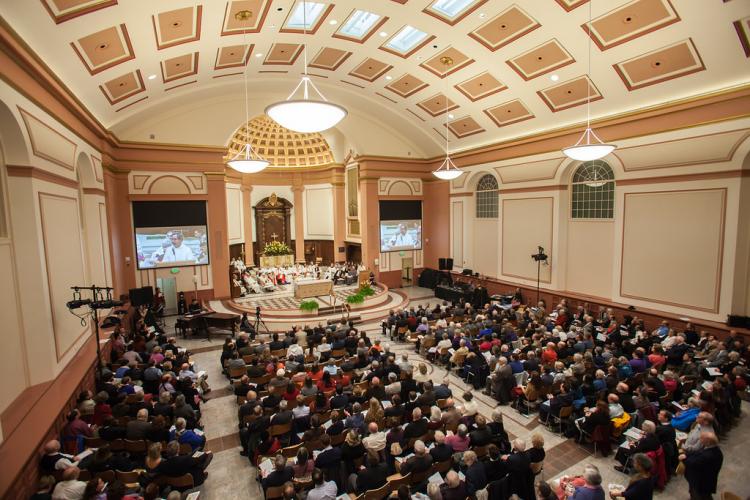 In addition to the cathedral's Sunday morning congregation, its ministries include The Crossing, an emergent church community of young adults that gathers on Thursday evenings; the Episcopal Chinese Boston Ministry; a Monday Lunch Program and MANNA, a ministry with the homeless community in downtown Boston.

The founding and building of St. Paul's Church

St. Paul's Church, Boston's fourth Episcopal church, was established in 1818 by a group of wealthy and influential Boston patriots who decided to found a distinctly American Episcopal parish. The two existing Episcopal churches, Christ Church (Old North), established in 1722, and Trinity Church, founded in 1733 on downtown Summer Street, had been formed before the American Revolution. The oldest Anglican parish, King's Chapel (1686), had already been swept away by the rising tide of Unitarianism. 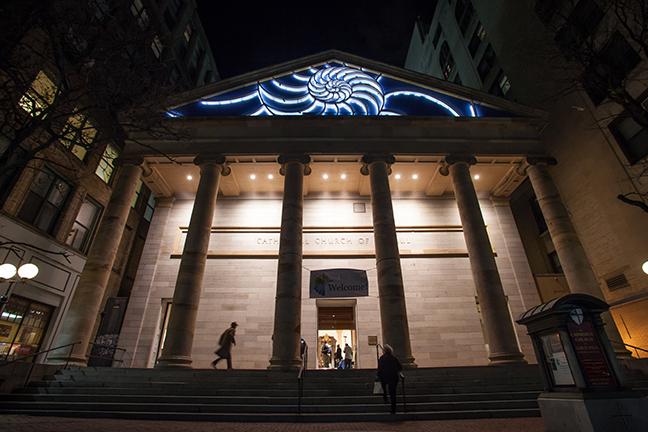 In 1819, the founders commissioned Alexander Parris and Solomon Willard to construct a Greek temple to contrast with the existing colonial and "gothick" structures of the town. St. Paul's Church was consecrated by Bishop Alexander Viets Griswold on June 30, 1820.

The first example of Greek Revival architecture in Boston, St. Paul's contrasted strongly with the colonial meeting house appearance of the Park Street Church (1809) across Tremont Street. The light Quincy granite, used for the body of the building, was brought from the quarries on the first railroad operated in the United States. The Ionic columns on the portico are of brown sandstone quarried near Acquia Creek in Stafford County, Virginia. To symbolize the patriotic fervor that inspired the church, a stone from Valley Forge in Pennsylvania was also included.

The exterior of the church remained virtually unchanged since the time of its construction until the spring of 2013, when the unfinished pediment (originally intended to contain a carved frieze representing Saint Paul preaching before King Agrippa) was installed with a major new sculpture. The cross-section of a chambered nautilus, "Ship of Pearl" by artist Donald Lipski, was officially lit on May 8, 2013. 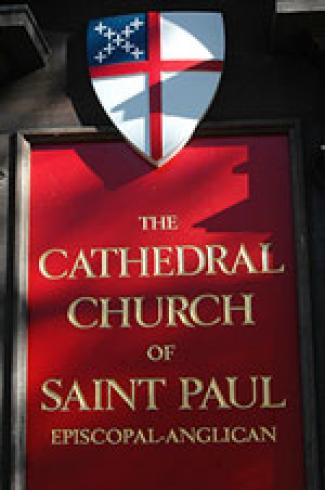 As early as 1876, a discussion of the question "Shall there be a Bishop's church in Boston?" was printed in the local newspapers. In 1904, it was announced that two sisters, Mary Sophia and Harriet Sarah Walker, had left an estate of more than a million dollars for the purpose of building, establishing, and maintaining a cathedral or bishop's church of the Protestant Episcopal Church in the city of Boston. In 1908, the Cathedral Church of the Diocese of Massachusetts was founded.

To symbolize that the new cathedral was indeed "a house of prayer for all people," Bishop Lawrence arranged for the doors to the pews to be removed.

In 1988, after 100 years on Beacon Hill's Joy Street, the diocesan offices moved to the building adjacent to the cathedral; the cathedral now functions as a center of mission and hosts important events in the life of the diocese, including Diocesan Conventions and Confirmation services.

About a decade ago, planning began for renovations, with the primary goal to make our cathedral church as welcoming as possible:  for the 600 people in the congregations that pray here each week, for Episcopalians across the diocese and for anyone who might come to a service or program or simply stop in and pray.

After being closed for more than a year for the renovations, the Cathedral Church of St. Paul re-opened and was officially rededicated at a celebratory public service on Nov. 13, 2015.

Some of the significant changes achieved by the renovations:

•    New glass doorways providing views into the church and back out into the world;
•    A sanctuary brightened by new skylights and enhanced lighting;
•    A new chapel, named for St. John the Evangelist, that is visible from the street and offers an intimate setting for prayer and reflection for individuals and worship for small groups;
•    Flexible worship and gathering space that serves both liturgical and programmatic needs, with chairs that replace fixed pews, making possible a variety of seating configurations;
•    LEED certification and a reduced carbon footprint through a new high-efficiency heating and ventilation system with zoned climate control;
•    A new elevator that makes all levels of the building accessible to everyone, and a new ramp into the chancel;
•    A refreshed and reconfigured lower-level Sproat Hall featuring dividable space for meetings, events and the weekly meal program, as well as new accessible restrooms and a footwashing station;
•    A well-lit and enhanced façade that makes a bold public witness and invites all to come and see.