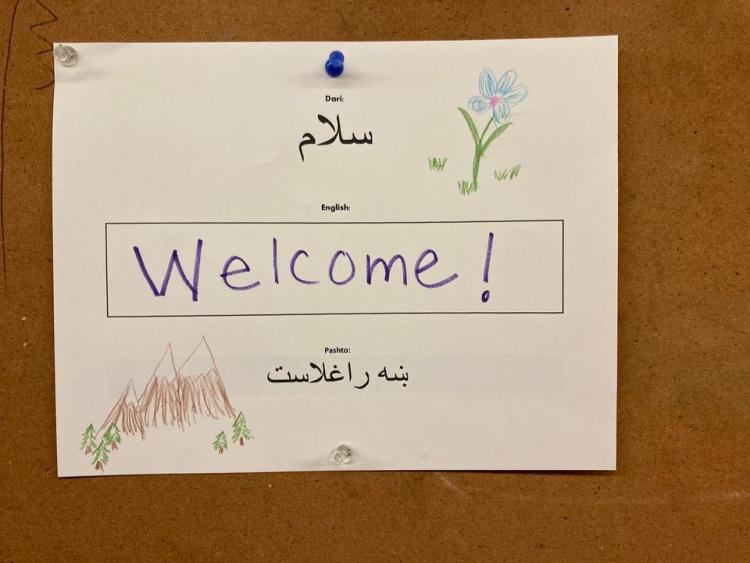 At St. Paul's Church in Newburyport, preparing the way this Advent means just that.

The parish has spent the early days of December getting ready to become the temporary home for an Afghan family of nine who arrived this week, to be followed by a second family of 13 expected in coming days. 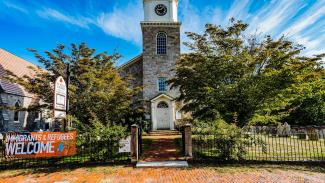 These families are among the thousands of endangered Afghans evacuated to American military bases during the chaotic August pull-out of U.S. troops from Afghanistan.

Massachusetts has been designated to receive at least 900 Afghan evacuees, according to the AP.  They began arriving in the Commonwealth in late September, often on short notice to local resettlement agencies which are now pressed to quickly find housing and provide support services as the number of arriving Afghan refugees has increased from the several hundred resettled in Massachusetts over a period of recent years to that many, and more, in the few months since the evacuation.

When the International Institute of New England, a resettlement agency with offices in Boston, Lowell and Manchester, N.H., put out word in the fall of the potential need for temporary housing, St. Paul's offered classroom and meeting space at the church that wasn't being used much because of COVID-19.

"We've been waiting a couple of months to hear back, and then it sort of happened all at once," St. Paul's rector, the Rev. Dr. Jarred Mercer.  The call came in early December that the agency desperately needed the space to temporarily house large families expected to arrive in a week's time.

"It's a no-brainer, really," he said of the church's decision to open its doors to evacuees until more permanent housing can be found.  "This is why we exist, to live as this continued expression of Christ's love and mercy in the world and in our place, today." 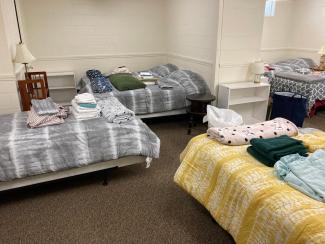 Courtesy photo via Facebook Classroom and meeting space have been newly converted to temporary living space at St. Paul's, Newburyport, thanks to an outpouring of donations.

A core group of about a dozen St. Paul's volunteers had already gone through an orientation process with the resettlement agency, he said, but it was all hands on deck to convert church meeting rooms into bedrooms and living areas for families who would be arriving with few, if any, personal possessions.

The preparations ranged from the nitty gritty of getting fire safety, municipal building authority and Church Insurance Co. approvals, to installing new locks for privacy and security, to sorting clothing donations and supplies and setting up furniture.

"It's really welcoming," Mercer said of the newly converted space.  "It feels light and airy, and people have donated some beautiful things, like brand-new beds.  It's turning out really well," he said.

An appeal to the wider community resulted in volunteered professional labor to install a shower, a surplus of donated furniture and clothing, and almost $30,000 raised, to date.

"It's been an amazing response in just a few days," Mercer said.  "Everything will go to supporting the families and what they need, which they should be able to speak for once they arrive."

With limited advance information to go on, it's hard to know exactly what the new families will most need next.

Their abrupt relocation to a historic seaport city northeast of Boston in winter is sure to be a culture shock, and with the area's high cost of living and low stock of affordable housing, community partnerships and support will be important as the families work toward self-sufficiency.

"One of the amazing things that's come from this is that not just the parish but the wider community in the city and neighboring towns have really stepped up," Mercer said.  "This is actually an opportunity for the larger community to come together to be this better, more loving, more generous people" and for others "to partner in ministry with us, wherever they are, whether they'd ever step foot in the church or not."

Everyone can play a role, he said.

"Other faith communities as well as The Episcopal Church throughout the nation are doing incredible things to welcome these evacuees and to love and serve them, so it's not going to look the same in every place.  Not everyone has classroom and meeting space that they can convert into temporary housing, but there's something they can do," he said.

The timing of the Newburyport church's reception of evacuee families seems poignantly resonant, given the season.

"I think it is essentially a playing out of the Advent narrative," Mercer said.  "We are told very clearly by Christ that in welcoming the stranger and caring for the vulnerable, we are welcoming and caring for and serving him, so preparing for the arrival of these new neighbors that we're called to love is, in a sense, preparing the way for Christ's coming, this radical in-breaking of God's love among us at Christmas.