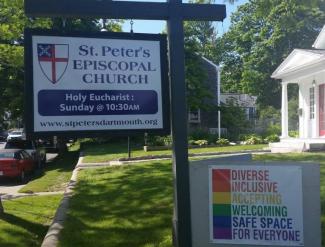 A refugee family from Afghanistan designated for resettlement in Dartmouth has yet to arrive, but already has a friend in Martin Costa, a member of St. Peter’s Church and that parish’s designated point person for organizing some support.

Leaders at several Episcopal churches on the South Coast have been in conversation about ways to collaborate or get involved in resettlement efforts in their area, according to St. Peter’s rector, the Rev. Scott Ciosek, including the Church of the Holy Spirit in Fall River and Grace Church in New Bedford.

Those efforts are still taking shape, but in the meantime, Martin Costa learned recently that a St. Peter’s Church neighbor, Ann Sheehan, is preparing to host an evacuee family in her home until more permanent housing can be secured. Retired from running a family campground business, Costa said in an interview that he wanted to give some of his time and skills in support of his church’s newest neighbors.

Potential community partners are still getting organized, so right now he’s networking with others who are interested in helping out and getting a sense of what the needs will be once the family arrives.

“It’s the work of the Holy Spirit when it brings people together when you least expect it,” he said of his early efforts.

“I just love helping people, and I want to be the action that Jesus always talks about,” he said. “That verse in, I believe, Matthew that says, you clothed me when I was naked, you came to visit me when I was in prison—that’s what I think of. Though these folks who are arriving are Muslim, this is encountering Christ in a different way. Everybody is a human being and a child of God, and so I hope we’ll get more people coming out with support without having any kind of prejudice.”

He noted that the Immigrants Assistance Center in New Bedford has set up a bank account to accept donations (Immigrants Assistance Center Afghan Resettlement Program, 58 Crapo Street #1, New Bedford MA 02740, with “Afghan Resettlement Program” in checks’ memo line). He welcomes inquiries from others interested in getting involved and can be reached by e-mail at martincosta@charter.net.

The Rev. Canon Dr. Jean Baptiste Ntagengwa, who serves as canon for immigration and multicultural ministries on the diocesan staff, said that a number of churches in the diocese are involved in a variety of ways with refugee resettlement, and that his office will be convening a group in January for conversation with staff from Episcopal Migration Ministries, to foster coordination and mutual support and learning.