Courtesy photo via Facebook Old North Church's lanterns lit for democracy on Jan. 5, 2022:  Old North has a long history and played an iconic role in this country's war for independence; it's also an active Episcopal church, here and now.

Old North Church in Boston lit its iconic lanterns on Wednesday, Jan. 5, the eve of the anniversary of last year's violent insurrection at the U.S. Capitol that sought to disrupt the certification of electoral votes and overturn the presidential election.

"Tonight we lit the lanterns at the Old North Church to stand for our American democracy and in solidarity with election workers across the country," Old North's vicar, the Rev. Dr. Matthew Cadwell, said in a Facebook post.

He was joined at the lighting by Bishop Alan M. Gates and Bishop Gayle E. Harris of the Diocese of Massachusetts, as well as Secretary of the Commonwealth William Galvin and a bipartisan body of election workers.  Their statements follow below. 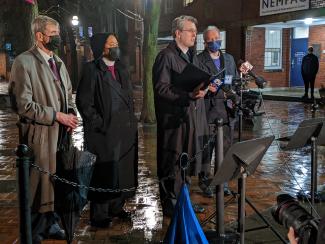 Two lanterns famously shone from the steeple of the Old North Church on the night of April 18, 1775. Inspired by those beacons lighting the way for American freedom and democracy, we continue to cherish and hold sacred the hard-fought values and ideals of our nation, even as we grow in deepening understanding of who we are called to be together.

We believe that the foundation of our country is our long tradition of democratic elections, enshrined in the Constitution and administered faithfully by officials across the country. No American and certainly no person of faith is pleased with the outcome of each and every election. But we trust that they are conducted honestly and fairly. When concerns do arise, laws enacted dictate the necessary steps for review.

With others, we have witnessed with deep concern the questioning of our electoral system and in particular the impugning of those who work tirelessly to ensure that elections are conducted justly. As we approach the anniversary of the Jan. 6, 2021, attack on the U.S. Capitol, the leadership of the Old North Church and the bishops of the Episcopal Diocese of Massachusetts stand in solidarity with election officials in support of our democracy. They, alongside the millions of voters who cast ballots across the country, ensure that our nation continues to shine the lights of freedom and democracy.

Last year the Most Rev. Michael Curry, Presiding Bishop of The Episcopal Church, speaking of the events of Jan. 6, said that the divisions which were manifest in those events “have origins in the depth of human sin that makes the self the center of the universe and everyone else the periphery; these divisions could well destroy a democracy.”

In memory of those killed on Jan. 6, 2021, and in support of the noblest ideals of our beloved nation, the Old North Church lights its sacred lanterns again tonight, signaling to all that the lights of freedom and democracy continue to shine brightly in our city, Commonwealth, and nation.

We pray that these lights lead us all to clearer vision, better understanding, and deeper reverence for the institutions of our democracy. May God continue to bless us in our life together as we shine beacons of light, justice, and love in Boston and beyond.

Statement from Secretary Galvin on Lantern Lighting at
Old North Church on the Eve of Jan. 6

From the beginning of our Republic, American Democracy has been the enduring core of our national identity, but it must always be guarded and protected, never to be subverted by any faction or event.

Throughout our history the fundamental action of citizens as voters has overcome internal strife and foreign challenges. Massachusetts, throughout its history, has defended American Democracy.

As we solemnly remember the events of January 6, 2021, it is important that we look to the future, not just remember the past. We must protect the administration of elections and those persons of every political affiliation who count the votes of our citizens and protect them from threats or intimidation.

Similarly, from our beginning, the lights of the lanterns in the steeple of Old North Church have served as both a warning and a call to action.

Once again the lights in this steeple shine from this historic church on this evening as a light to the nation to illuminate a path forward to warn and call us to action to defend American democracy by protecting the integrity of our electoral process and those throughout the nation who honestly administer it.