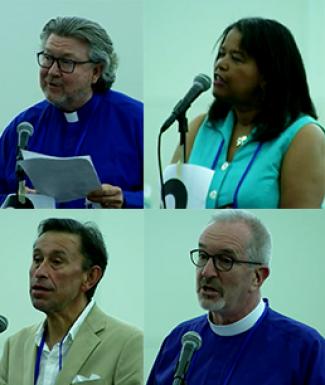 July 8, 2022:  As the 80th General Convention got underway in Baltimore, it looked like the movement afoot across The Episcopal Church to add the late Rt. Rev. Barbara C. Harris to the church's commemorative calendar had hit a major speed bump in the form of a substitute for resolution C023 from the legislative committees dealing with prayer book, liturgy and music matters.

The committee substitute would have essentially kicked the commemorative can down the road by recommending that the Standing Commission on Liturgy and Music (SCLM) prepare documentary and liturgical materials for future consideration "so that when the time is appropriate for her inclusion in the Church Calendar all deliberate steps may be taken to include her." It asked the SCLM to report back to the next convention.

That substitute proposal came before the House of Bishops for initial action on July 8, but the bishops approved instead--and without dissent--another substitute proposed by Diocese of Albany Interim Assisting Bishop Michael Smith.  It directs that Feb. 11 and a proper for trial use be included now in Lesser Feasts and Fasts to commemorate Harris's historic consecration in 1989 in the Diocese of Massachusetts as the Anglican Communion's first female bishop, rather than the originally proposed March 13, the date of her death in 2020.

"This resolution changes many of the others that were offered by taking the emphasis off of her sanctity and placing it on her consecration in the spirit of two others in Lesser Feasts and Fasts, the consecration of [first American Episcopal bishop] Samuel Seabury and ordination of [the Anglican Communion's first female priest] Li Tim-Oi," Smith said in presenting his amendment.

Sixteen resolutions calling for Harris's inclusion in the church's calendar had been submitted from dioceses around The Episcopal Church in the lead-up to General Convention.  With the duration of the convention shortened from eight to four days because of COVID-19 concerns, and its legislative process condensed as a result, resolutions regarding commemorations were mostly consolidated or deferred during pre-convention deliberations.  Pre-convention legislative hearings had also surfaced some opinion that it is too soon to commemorate Harris, citing the traditionally observed interval of at least 50 years between a person's death and their inclusion in the church's calendar.

Speaking in favor of the Smith proposal, Bishop Gayle E. Harris, who succeeded Barbara Harris as bishop suffragan in the Diocese of Massachusetts, said the commemoration was about more than one person, and that "while we're also honoring her, let us remember that we're honoring the fact that this church moved to have a woman, finally, in the House of Bishops."  She noted that it's been more than 33 years since her predecessor's consecration.  "We don't need to wait to another convention.  It's been long enough and it's time now to commemorate both history and Barbara," Harris said.

Bishop Daniel Gutierrez of Barbara Harris's home diocese of Pennsylvania also spoke in favor.  "As a sibling from the City of Philadelphia, my diocese speaks with great love, respect and just deep devotion to Bishop Harris," he said.  "From the time she grew up to leading the way [as crucifer at the ordination] of the Philadelphia 11 to her consecration as bishop, I can think of no greater person to honor in this day and age than Bishop Harris, and I would hear great celebration in my diocese if she's honored in this way."

"She was a bishop for the whole church in a way perhaps no other in our lifetime has been," Gates said.