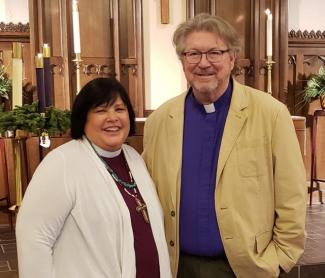 Beginning in January, Bishop Carol J. Gallagher, who serves as one of three regional canons in the Diocese of Massachusetts, will be assisting in the Diocese of Albany, on a limited basis, providing supplemental episcopal pastoral support as that diocese begins to come into compliance with the 2018 General Convention resolution on provision of marriage rites for same-sex couples.  Gallagher will continue in her role as regional canon for the congregations of the Central Region of the Diocese of Massachusetts.

A Dec. 20 announcement from the Diocese of Albany explained that while its Standing Committee continues to "hold a traditional view of marriage they recognize that in order to comply with General Convention Resolution 2018-B012 and in order to work towards healing within the diocese, a pathway needed to be made available for those clergy wishing to utilize same-sex marriage rites."  Gallagher will work with Albany's interim assisting bishop, the Rt. Rev. Michael G. Smith, to accomplish this provision.  Smith was appointed Albany's interim assisting bishop in August, following the departure of Albany's former bishop, William Love, from The Episcopal Church.

"While Carol and I differ on our theological views about whether Christian marriage is between two persons or between a man and a woman, we have been friends and colleagues for many years and have been able to focus on that which unites us rather than divides," Smith said in the announcement.

Gallagher added, "We will serve the diocese and the people as a team, offering a diverse approach to the life of faith.  At Bishop Smith's direction I will be available to walk in faith with all those who might need my gifts."

The Diocese of Albany's full announcement is available here.