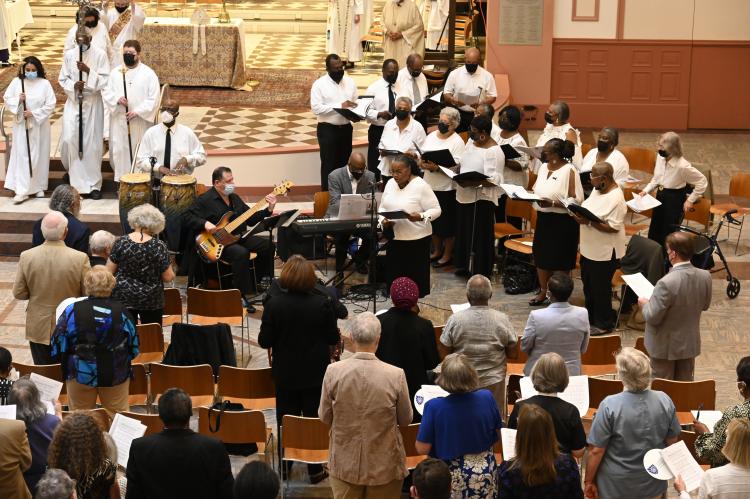 Julianne Ture Choir members from the Church of the Holy Spirit, Mattapan and St. Cyprian's Church Roxbury lead the singing of "Soon and Very Soon."

Hymn singing and reminiscences marked the late afternoon memorial service for the Rt. Rev. Barbara Clementine Harris at the Cathedral Church of St. Paul in Boston on June 12, which would have been her 92nd birthday.

About 1,000 viewers watched the service via livestream, and churches in Brockton, Cambridge, Salem and Weston also hosted gatherings simultaneously as a way to extend participation in the service.

Harris died on March 13, 2020, just as the COVID-19 pandemic hit. Initial plans for a churchwide memorial service at Washington National Cathedral were paused and have not advanced, but the recent local easing of public gathering restrictions opened a window of opportunity for a diocesan liturgy to mourn the loss and celebrate the life of Harris--a civil rights and social justice activist and a pioneering disciple of Jesus.

Harris had a long career as a corporate public relations executive and an active lay ministry in The Episcopal Church before answering the call to ordination in her 50s.  As a Black woman, she faced down racism and sexism in her rise over the decades and weathered considerable opposition when the Diocese of Massachusetts elected her in 1988 to become the first female bishop in the worldwide Anglican Communion.  By virtue of that iconic role, she belonged to the whole church, yet was also claimed as Massachusetts' own, having served as its bishop suffragan until her retirement in 2002.

She was a sought-after preacher and throughout her ministry remained steadfast and straight-talking in her advocacy on behalf of the oppressed and marginalized.

"Wherever you are in the diocese or throughout the world, we are grateful to lift our prayers of thanksgiving together with you," Massachusetts Bishop Alan M. Gates said in his opening remarks. "We gather to remember and give thanks to God for Barbara C. Harris, our sister, our companion, our bishop, our friend."

"We gather, finally, two years and three months after her passing, and after so much time, we gather knowing in fact what we predicted in advance: that we would miss her terribly and that she would remain a reality in our lives, in our memories, in our conversation, in our laughter, in our conscience, in our faith and, by God's grace, in our courageous action," Gates said. 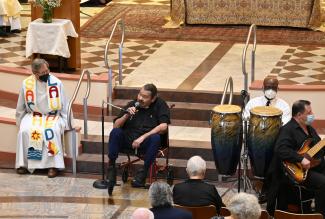 In detailed plans that Harris left for her funeral, she designated as preacher her longtime colleague and friend, the Rev. Canon Edward W. Rodman, now retired, and himself known churchwide as a strategist, advocate and activist for civil rights and social justice and an educator and mentor across generations in The Episcopal Church.

Acknowledging that he is just one among a multitude of people whose lives Harris touched, Rodman opened his sermon time to members of the congregation for sharing their memories of Harris, leading off with several anecdotes of his own.

He recalled accompanying Harris up the steps of the Cathedral Church of St. Paul for a press conference amidst the news media frenzy following her historic election.  A pigeon flew over and made a deposit on her head.

"Now, there are several ways that one could respond to that," Rodman said, "but Barbara just laughed and said, 'God is trying to tell me something.'" The incident, Rodman said, illustrated her grace under pressure and her sense of humor, but also her humility.

"Barbara was not only compassionate and caring. She was also very classy, very graceful, and on occasion, she could be scurrilous," Rodman said, citing a sermon delivered to a national audience "in which she said, one of the major problems is that we have too many half-assed Christians. And there it is. If the Gospel tells us anything it tells us to be full in our faith, full in the Lord and full in our complete and utter commitment." 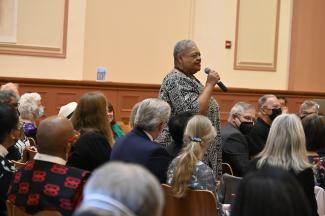 Julianne Ture Deborah Harmon Hines shares a memory of singing "Lead Me, Guide Me" with Harris the night before her historic consecration, and leads the memorial service congregation in the same.

During the story sharing that followed, Deborah Harmon Hines, a past Union of Black Episcopalians president and longtime General Convention deputy from the Diocese of Western Massachusetts, began singing "Lead Me, Guide Me," which she remembered singing with Harris the night before her consecration.  The cathedral congregation spontaneously began joining voices with Hines in a grace-filled moment that would have surely delighted Harris, an accomplished pianist and lover of hymns who preached their verses in her sermons and cited the importance of church music tradition to her personal faith formation.

Choir members from the Boston congregations of the Church of the Holy Spirit, Mattapan and St. Cyprian's Church, Roxbury led the singing of hymns that Harris had chosen for the service, including "My Faith Looks Up to Thee," "Soon and Very Soon," "Rock of Ages, Cleft for Me," "Abide with Me," "Close to Thee" and "I'll Fly Away."

In conjunction with the memorial service, a wreath was laid at Harris's grave in the Fairview Cemetery in Willow Grove, Penn., in the northern suburbs of her hometown of Philadelphia.

At least 16 resolutions from dioceses across The Episcopal Church have been submitted to the upcoming General Convention in July, calling for Harris's inclusion in the church's commemorative calendar.  With the duration of the convention now shortened from eight to four days, and its legislative process condensed as a result, it is not yet known if resolutions regarding commemorations will be among those prioritized for consideration this year or held over for action by the next convention. Legislative committees have been asked to complete their prioritization work by June 25.