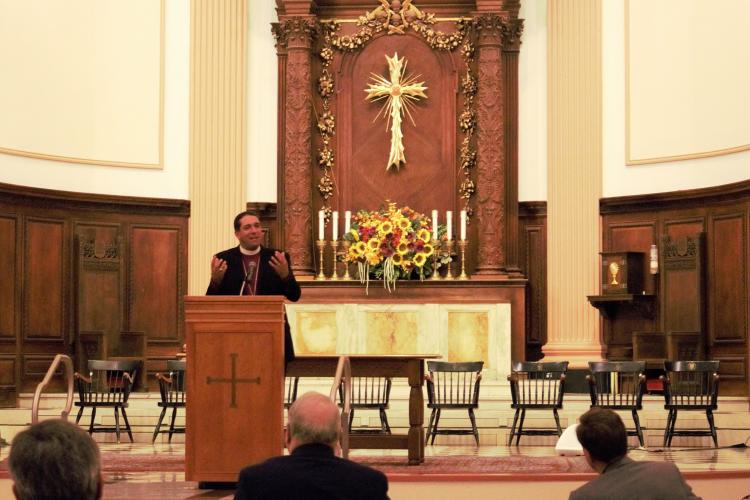 The Most Rev. Hosam E. Naoum, Anglican Archbishop of Jerusalem, brought a message of gratitude and Christian friendship to the Cathedral Church of St. Paul in Boston while in town for meetings of the board of the American Friends of the Episcopal Diocese of Jerusalem (AFEDJ), and friends and supporters had the opportunity to gather with Naoum for an Oct. 14 reception in his honor.

It was the cathedral church’s first in-person community event since the pandemic shut-down, and the archbishop's first visit to the U.S. since his installation in May as the 15th bishop—and fifth Palestinian bishop—of the Diocese of Jerusalem.  That diocese comprises congregations and ministries in Palestine, Israel, Jordan, Lebanon and Syria.

It is both a responsibility and privilege, he said, to be the “living stones” in the holy Christian places of the Holy Land, and to “bear witness to the Gospel of Jesus who walked and lived and taught, healed, died and rose again” in those places.

“These stories continue to be not simply stories that we just recite or try to retell, but are lived experiences through the power of the Gospel. That is entrusted to each and every one of us,” Naoum said.

“I want to say also that when pilgrims come to Jerusalem and to the diocese at large, this means a lot to us because we are enriched by the gifts and the charisms that you bring.”

The gathering also heard more about AFEDJ’s mission to educate people in the United States about the Christian witness of the Diocese of Jerusalem and to raise money to support its schools, hospitals and centers for children with disabilities.

“These institutions serve some of the most vulnerable and poor, displaced people in the Middle East,” AFEDJ executive director John Lent told the gathering.

He cited as particular examples the Holy Land Institute of the Deaf in Salt, Jordan, and the Ahli Arab Hospital in Gaza.

See more photos from the event on Facebook here.  Visit https://afedj.org/ to learn more about the humanitarian ministries of the Episcopal Diocese of Jerusalem and ways to support them.