The Rev. Spencer Hatcher, the new executive director of the Barbara C. Harris Camp and Conference Center in Greenfield, N.H., arrived on the job in February after four years working at the Church Divinity School of the Pacific in Berkeley, Calif.  She is just the third executive director to serve the Barbara C. Harris Center in its nearly 20 years as the Diocese of Massachusetts' camp and conference ministry.

In a conversation via Zoom on May 16, she talked about the rediscovery of changing seasons and her favorite spot on the property so far; how her own Christian faith journey has been shaped by camp and conference center ministries; and what's planned for youth and families at camp this summer after two years of COVID interruption.

You arrived on the job in February?  What's filled these first months for you?

Yes, I got here at the beginning of February and my first day was Feb. 14. These first months have been really just trying to get a sense of what is happening. It's been a pretty significant leadership transition here with COVID and the shift to being mostly closed, and then interim directors coming in and the slight re-opening--so it's been trying to get a sense of who are the people that are involved here, what staff do we have right now, what staff do we need.  And then the big thing was, how do we launch summer camp for the first time in a couple of years? It's hard to believe it's only been three months since I got here.

What are your early impressions, both of the facilities and the ministry, as you see them with new eyes for us?

First of all, the facilities are beautiful, the land is beautiful. It's 20 years old, which is kind of unheard of in terms of still being new in the world of Episcopal camps and conferences.

This is a weird time and a challenging time to figure out what stability and sustainability look like moving forward, in terms of what has changed temporarily in the world and in our culture of gathering, and what has changed maybe permanently, and having to figure that out in real time.

I think one of the things that continues to be a real place of possibility is just the number of folks both in the Diocese of Massachusetts and in the surrounding Province I [New England] area who have a vested interest in what it looks like to support the BCH Center.  There's really a lot of questions about what that looks like and what the mission is moving forward. There are a lot of folks who are invested and want to be partners in that work, which I think is pretty great.

As you come to know the property, is there a favorite spot or discovery so far? 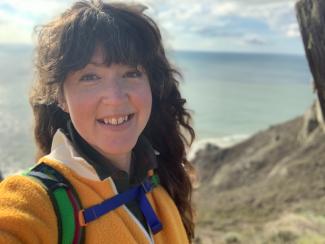 I love any and all things by the water, so my favorite spot that I've found so far is a campfire ring right along the lake, which I think is a little bit too much of a hike for most people, but it is prime real estate and has become one of my favorite spots. I went snowshoeing down that way, I've taken some hikes down that way, and to get to see it in changing seasons, too, has been really neat.  In general, to be back in a world [from California] where there are seasons is a change!

What drew you to this job, in particular, and to camp and conference center ministry more broadly?

I grew up in Maryland and very much found myself and my faith and ultimately my call into the priesthood, as I continue to understand it as it unfolds, at Claggett Center, which is the Diocese of Maryland's camp and conference center. Even in moments when I would have self-identified as having no faith at all, I was really rooted in this particular Christian community and kind of came into myself in that space. So the world of camp and conference center ministry has always been near and dear to my heart and really was what formed me.

I went to seminary having not gone to a typical Episcopal church on a Sunday morning in a really long time because it was that camp community that had lifted me up and sent me out. And so I always imagined that maybe at some point in my ministry I would return back to that world, though I wasn't sure because it is mostly a lay-led world, which I think is a real strength of our camp and conference centers.

And so I served in parishes, I continued after seminary to be the program director at Claggett, and then I moved out to California where I was for about four years. That was the first time in about 15 years that I'd not worked hands-on at a camp and conference center. I thought maybe it was good to try a new season to see, do I love this work or do I just love this work at this place that raised me up? So I still served as a chaplain at both St. Dorothy's Rest and The Bishop's Ranch, which are the Diocese of California's camp and conference centers, and I worked at CDSP [Church Divinity School of the Pacific], which was a different world. I really learned a lot there, and I got a chance to see different parts of the church and got to do camp a little bit differently.

Then, I think the story that a lot of priests that I know tell, which is that COVID happened--and COVID continues to happen, obviously--and the giant pause button that it pushed on everything got me thinking and reflecting and paying attention to the things that were bringing me life and to the things that maybe weren't, and starting to wonder with myself why this [idea of a] return to camp and conference center ministry was always in some mystical future time.

I was visiting with [former BCH Center executive director] John Koch, who had taken a job at Bishop's Ranch, kind of talking about my place of discernment, and he told me that the Barbara C. Harris Center was going to be posting its open position soon. I talked with him a bit more about the heart of the place and some of the ministry and mission and legacy of Barbara C. Harris herself, and thought, well, I'll put my application in and see what happens.

And then, in those early conversations with the Search Committee and the Board of Trustees, just to hear, in a space where I was really feeling drawn into new ways of being church and new ways of bringing people together in these spaces of transformation, that this place was doing its own deeper dive into what it means to be a resource for people and a place within the church where those possibilities of transformation happen--the more conversations I had with folks about that as well as the legacy of this place, I thought, maybe the Spirit is in fact saying, maybe it is me and maybe it is now. So I continued the process, and here we are.

After two seasons on hold because of COVID, summer camp!  What's planned?

This is going to be a transition year, which we knew coming in. It's been a couple of years since camp happened. We want to try and keep up the family weekends, which was an invention of pandemic life but which had some gifts to offer, so we will open and close the summer with family camp weekends, two sessions, one at the beginning and one at the end. And then there will be four sessions of the more typical overnight camp for folks anywhere between 4th and 12th grade. We went ahead and extended a grade in case there were any 12th graders who lost the ability to go to camp [because of COVID] who might just want that one more year of camp.

We are still hiring.  Staffing has been tough this year, which is par for the course for all my colleagues who do this work.

What about the conference side of things?  Is the calendar filling up?

The calendar is filling up, spring, summer, early fall are quite full. As COVID goes on and as these new variants continue to come, part of the challenge is that things can look full and then changes happen, so there's still a lot of flexibility that's happening. For the summer, at least, we're very full with groups, with our own camps and then with a lot of others that use our facilities. Staff are staying quite busy here as we enter into the summer and fall. We're all systems go, that's for sure.

What's something you really want people to know now?

I would love to continue to meet people who have ideas or questions or a vested interest in this place, especially as we look towards next year's 20th anniversary. Some of it is that I don't know what I don't know, so if there are folks who have stories to share, I would love a chance to get together, either virtually or in person.

The Barbara C. Harris Camp and Conference Center is hiring summer staff (18+ years old) to provide a fun, enriching and supportive experience for campers, June 24-Aug. 8: lifeguards (can be 16+), canoers and kayakers, ropes course facilitators, music leads and general counselors. The summer salary range is $2,100-$2,500 (depending on training and certifications), with on-site room and board and WiFi. Find the application here.

Summer camps at the Barbara C. Harris Center are inclusive Christian formation ministries of the Diocese of Massachusetts in partnership with the dioceses of New Hampshire and Western Massachusetts. You and your family are welcome here!  It is an Episcopal camp, passionate about being a safe space for all campers and families and striving for a rich diversity of campers and staff.  Each week chaplains participate in all camp activities and lead space for chapel and reflection.

Family Camp weekends are for families of any and all configurations. Enjoy a weekend away, building community and exploring faith, alongside activities like arts and crafts, hikes, swimming, boating, small group conversation, worship, music and more.

Youth Camps are for all campers completing 4th to 12th grade. Whether climbing high on the ropes course or paddle boarding on Otter Lake, there's something for everyone. From swimming to games, to campfires and dancing and classic skits, campers are sure to create new friendships and renew old ones year after year.